Kurt Elling at Yoshi’s in Oakland

Tonight I saw Kurt Elling perform for the first time. He appeared at Yoshi’s with his usual collaborator, Laurence Hobgood, on piano, Rob Amster on bass and Willie Jones on drums. Kurt is a GREAT showman, engaging, witty, funny, and extremely talented. Laurence demonstrated his classical training in his solos, which were in turn soulful, swinging and virtuosic. I heard intimations of Prokofiev, Rachmaninoff, Ravel and even Bach in some places. Rob played with immense sensitivity and Willie played with such energy and had such great timing it was near impossible to sit still while listening (well, completely impossible in my case!). Here I am with Kurt and Laurence, unfortunately captured with my eyes closed on my less than great camera phone! 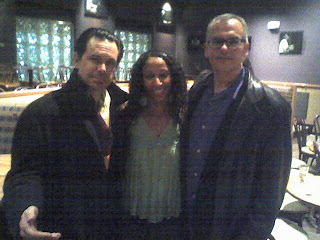 email
This entry was posted on Saturday, March 3rd, 2007 at 8:56 am and is filed under Kurt Elling, Laurence Hobgood, Victoria Theodore. You can follow any responses to this entry through the RSS 2.0 feed.